Trump: Should a Christian Vote for the “Lesser Evil”?

By Doug Newman – email me here.
Here I am on Facebook.
If you would like to publish this elsewhere, please just link to this URL as I update my articles somewhat frequently. Thanks!

Posted at A Call to Paul and Freedom4um.

“Pretend with me that you’re an old German on your deathbed today. Would you rather tell your grandchildren, ‘I voted for the Nazis because they seemed better than the Communists and no other party could win’? Wouldn’t you rather be able to rise up and say, ‘I publicly denounced the Nazis and the Communists? We were a minority – 1 or 2 percent – but we stood up for the truth and we were right! We proved not all Germans were mindless torchbearers for tyranny! We were ridiculed, we were beaten and jailed, but we saved this nation’s soul. Now children, go and live your lives in a way to make me proud’?” – Vin Suprynowicz

“When Christians entangle themselves with the kingdoms of the world, they become worldly in the very worst way.” — Pastor Gregory Boyd

“Am I therefore become your enemy, because I tell you the truth?” – Galatians 4:16

In every election, American Christians are told that they have a duty to vote for the lesser of two electable evils. The election of 2016 is no different.

There is nothing Christian whatsoever about this way of thinking.

Christians are not to choose between evils:

But what if the only electable candidates are evil? Christians are not to do things just because the majority of the secular world does them. 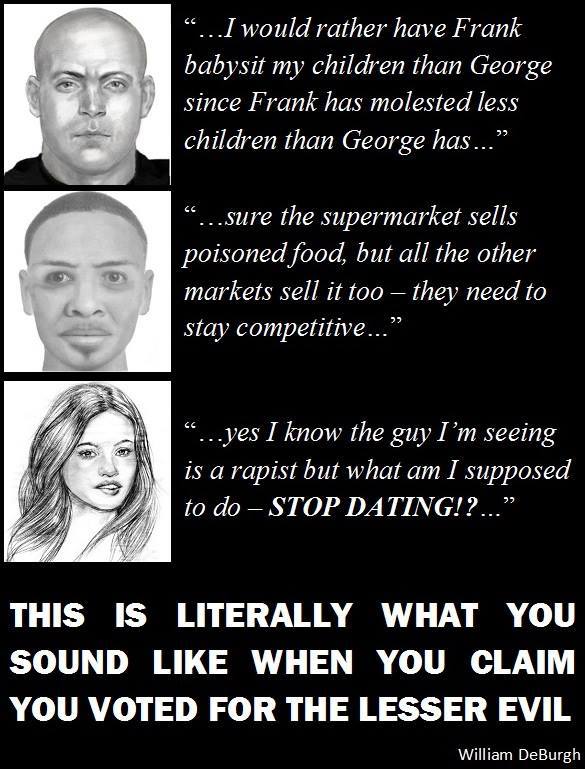 Jesus said that we shall know people “by their fruits“. Donald Trump’s spiritual condition is ultimately, as always, between him and God. However, the fruit on the Trump tree is that of a full frontal moral reprobate. Christians are supposed to be salt in a world of decay. How do you expect to fight moral rot by electing someone who:

As this one blogger so eloquently puts it: “By saying the irresponsible, mean-spirited, ignorant things you say so freely and so frequently, you’ve given other like-minded people license to do the same. You’ve opened up the floodgates for our corporate sewage to flow fully. People no longer conceal their vile mess, they now revel in it, they broadcast it and retweet it.”

Yes, I know that God often uses imperfect people as part of His Plan. He let Obama become president and He just may well let Hillary become president. However, he does not require that Christians support such people.

However, over 75 percent of white evangelical Christians plan on voting for Donald Trump for president. 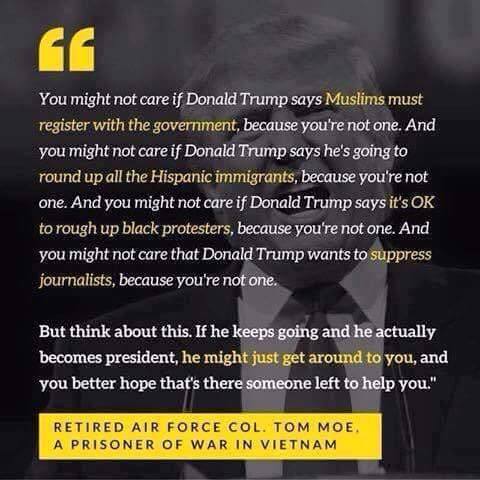 As if his personal history weren’t vile enough, here are several of his political positions over time: 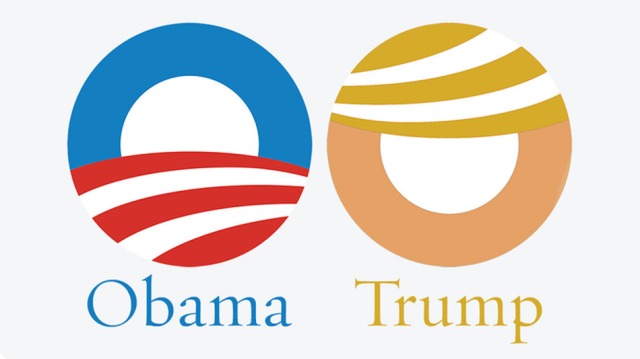 And then there was Trump’s acceptance speech at the Republican National Convention in Cleveland, in which he said, among other things:

And if you still don’t get it – and I don’t say this for the wrong reason – go back and read this article again. If you can’t see beyond Trump vs. Hillary, you have absolutely zero discernment. You are being played like a piano. You are not required to choose between arsenic and cyanide when numerous alternatives exist.

Being in total denial about your candidate’s past is not just a liberal’s disease.

If Charles Manson were the GOP nominee, I have zero doubt that millions of professing Christians would rationalize away their support for him  by pointing out the Clinton body count and saying things like “but he was only responsible for seven murders”.

In Acts 1:6-8, the Apostles asked Jesus, “Lord, wilt thou at this time restore again the kingdom to Israel?” They wanted Him to restore Israel as a political state and throw off the shackles of Roman oppression. Instead Jesus called on them to preach the Gospel throughout the world. He knew that people needed a Savior far more than they needed a change in political regimes.

The Bible contains the word “king” almost 2000 times. Hence, Christians are to be mindful of worldly political matters. However, our ultimate call as Christians is to build Christ’s Kingdom. When we yoke ourselves unequally with a party or candidate because we are so frantic and desperate to put someone in political office or to keep someone else out of office, we exhibit the worst form of worldliness.

Is evil what Christians should promote? Is promoting evil Christlike? Can promoting evil bring about good? Does promoting evil reflect the fruit of the Holy Spirit? Shall we trade our birthright for so much political pottage? What shall it profit us if we gain the White House and lose our souls?

As Christians, our call is to serve from the bottom up rather than rule from the top down. We need to remember that our citizenship is in heaven and that our True King rules over a Kingdom that is “not of this world.” More than anything else, we need to look long and hard in the mirror, examine our own sins and hit our knees in repentance – I need to do this more than anybody.

We Christians need to place our faith in God, not politicians. And we need to fear God’s Judgment far more than we fear Hillary.

And look outside the duopoly at the state and local level as well! There are many great candidates. And if you do nothing else, vote “yay” or “nay” on any ballot initiatives.

My name is Doug Newman. I live in Aurora, Colorado, just outside Denver. Food for the Thinkers is mostly about the connection between Christianity and libertarianism. Most Christians do not understand libertarianism. And most libertarians do not understand Christianity. Hopefully, this blog helps clear up those misunderstanding. Check out my old page at www.thefot.us And remember: When you let people do whatever they want, you get Woodstock. But when you let governments do whatever they want, you get Auschwitz.
View all posts by Food for the Thinkers →
This entry was posted in Uncategorized and tagged Bible, Christians, donald trump, election 2016, hillary clinton, Jesus, lesser evil. Bookmark the permalink.

11 Responses to Trump: Should a Christian Vote for the “Lesser Evil”?

Leave a Reply to Penni B Cancel reply