Donald Trump and the Death of Discernment

Donald Trump’s ascent to the White House is, every bit as much as that of his predecessor, evidence of the death of discernment in America.

Let’s forget, for a moment, all the gossip and noise and ask ourselves why is Trump so famous and why is he now the president?

Trump is famous for being famous. Have a look at the Forbes 400 list of American billionaires. Some are famous: Gates, Buffett, Zuckerberg, Jordan, Oprah. However, most are not. You may have heard of their companies – Google, Starbucks, Dish Network – but not of them personally. Sometimes you might know the name – Jeff Bezos, Phil Knight, Michael Dell – but not what they look like. The difference is that Trump has been in everybody’s face flaunting his wealth and trumpeting what he sees as his own wonderfulness since at least the early 1980s.

We have never seen an egomaniac nearly approaching Trump. He makes Muhammad Ali look like a Milquetoast. The Bible prophesies – Two Thessalonians 2:3-4 – of the “son of perdition; Who opposeth and exalteth himself above all that is called God, or that is worshipped.”

Trump’s spiritual status is, as always, between him and God. I imagine that Trump is some sort of deist, believing that there is a god, but that he has no duties toward that god. And even though Trump is not the “son of perdition”, he exalts himself endlessly unlike anyone else we have ever seen in our out of politics.

Trump’s supporters are in just as much denial as those of any other president about his personal past. This goes double for his Christian supporters. They KNEW he was an adulterer who bragged about his adultery; they KNEW that “grab her by the p____” was just one of dozens of examples of him talking about women like trash; they KNEW he owned a strip club; and they KNEW he saw no need to repent as he felt he had done nothing wrong.

And they still supported him.

And they give the lamest excuses.

“He’s a businessman.” So are George Soros, Michael Bloomberg, Ted Turner & Larry Flynt. So are all the Wall Street and Detroit executives who took all the bailout money. These people know as much about economics as does Bernie Sanders. Do you want any of them as dogcatcher, let alone president?

“He built things.” Quick! Tell me who quarterbacked the construction of the Freedom Tower in New York, the Willis Tower in Chicago or the Venetian in Las Vegas! You don’t know and I don’t know either because they haven’t been in our face 24/7 for decades.

“He created jobs.” So do lots of people. Look at this list of America’s largest employers. How many of their CEOs can you name? If you’re like me, not very many. Starbucks creates LOTS of jobs and the right seethes with hatred for them.

“He speaks his mind.” So does your neighborhood wino.

“He’s not politically correct.” Neither is the Grand Dragon of the KKK.

“He gives a finger to the establishment.” So does Antifa.

And finally, “He’s not Hillary.” Well neither are 320,000,000 other people. Is this the best you can do? “He’s not Hillary” is not a moral standard. Indeed, it constitutes a reckless disregard for morality in which anything and everything is acceptable because “he’s not Hillary”. If anything, it is a scare tactic.

And just being in denial does not make the truth go away. I won’t call Trump supporters “low information voters” as they endless amounts of information just a few keystrokes away. I will call them “high denial voters”. They simply don’t want to acknowledge the truth. They are not the only such people.

In 1943, before he wrote 1984, George Orwell wrote of a “nightmare world” wherein, if the Leader “says that two and two are five – well two and two are five.” Americans pride themselves on being independent thinkers while at the same time succumbing to herd mentalities. The controlled right is no different than the controlled left: If people in their political tribe say it, they will believe it, no matter how preposterous it might actually be. 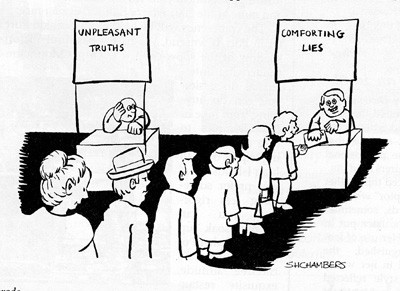 And this is at a time when we have more information available to us than any other people in the history of the world! I guess it is just something in human nature that finds comfort in conformity. Lies are often comfortable and the truth is often uncomfortable.

While the chair-warmer in the White House, no matter who that person may be, is no doubt a problem, he is not the problem that truly plagues America. And the problem is not in the houses of Congress, the courthouses or the statehouses. The problem is in your house and my house.

The first three words of the Constitution are “We the People”. “Constitution” is not just defined as a political document outlining the duties of a government. It is also defined as the composition of something. As long as the great masses of people are so easily influenced by whatever sounds good, and as long as they seek security in parties and politicians, they will, whether they recognize it or not, be under the heel of tyrants.

I say this as someone who once could very much be described by the previous sentence. Then I started reading between the lines and doing some independent thinking. And in the spring of 1992, I walked off the plantation. When will you do likewise?

My name is Doug Newman. I live in Aurora, Colorado, just outside Denver. Food for the Thinkers is mostly about the connection between Christianity and libertarianism. Most Christians do not understand libertarianism. And most libertarians do not understand Christianity. Hopefully, this blog helps clear up those misunderstanding. Check out my old page at www.thefot.us And remember: When you let people do whatever they want, you get Woodstock. But when you let governments do whatever they want, you get Auschwitz.
View all posts by Food for the Thinkers →
This entry was posted in Uncategorized and tagged discernment, obama, Trump. Bookmark the permalink.