If You Liked Bush, You Ought to Love Obama

Am I therefore become your enemy, because I tell you the truth?
– Galatians 4:16

GW Bush outspent Kommunist Klinton by $1 trillion per year and added $5 trillion to the debt. If you liked Bush, why do you hate Obama?

GW Bush gave us the Patriot Act, which gave Uncle Sam broad scope to spy on us without warrants, as the Fourth Amendment requires. Obama dramatically expanded the NSA’s PRISM program. If you liked Bush, why do you hate Obama?

GW Bush gave us No Child Left Behind. If you liked Bush, why do you hate Obama?

GW Bush also gave us DHS, TSA and guilt without trial. If you liked Bush, why do you hate Obama?

GW Bush never lifted a finger to restore Second Amendment rights. If you liked Bush, why do you hate Obama?

GW Bush signed off on taxpayer funding for Planned Parenthood every year. If you liked Bush, why do you hate Obama?

GW Bush said ONE THING about Jesus ONE TIME when he was campaigning for president in 2000, and that was all it took for millions of right-wing Churchians to go gonzo crazy over him. (And they were in total denial about his reckless expansion of government.) Obama, too, has claimed to be a Christian. If you liked Bush, why do you hate Obama?

GW Bush started wars against Iraq and Afghanistan. Obama started a war against Libya and is about to start one against Syria. He has committed acts of war against Pakistan, Yemen and Somalia and has threatened war against Iran. If you liked Bush, why do you hate Obama?

GW Bush started drone attacks. If you liked Bush, why do you hate Obama?

GW Bush signed into law the ban on manufacture and sale of many incandescent light bulbs. If you liked Bush, why do you hate Obama?

Why do I say this? Why do I bring up Bush as he is long gone? Because bigger and more important issues persist: the two parties are identical and the majority of Americans just don’t get it. They – and their respective media pimps – talk differently. However, once elected, they both do the same thing. They both radically expand the welfare and warfare states.

And in election after election, millions cling to the totally false hope that Republicans will bring less government. Republicans have a history of campaigning like Patrick Henry and governing like Maxine Waters. They are no more likely to restore liberty than Obama is to give you something for nothing.

Does anyone seriously think that the guy who brought the health mandate to Massachusetts was going to repeal Obamacare? When have Republicans ever repealed a single one of the programs that they insist they hate so much?

No matter who occupies the White House anymore, they can count on millions of people virtually worshiping them. This is especially true for our last two presidents. It is chilling to think what the cult of personality surrounding the next president will look like. Scripturally speaking, this is part of what I call the Big Ramp-Up to the Antichrist. Revelation 13:3 tells of an omnipotent political ruler who is worshiped the world over.

When Ronald Reagan came to Washington in 1981, the debt was less than a $1 trillion, the federal budget was $600 billion, one in 50 Americans was on food stapmps and there were 300,000 people in prison. Today, the debt is almost $17 trillion, the federal budget is over $4 trillion, one in seven Americans is on food stamps and there are 2.2 million people in prison. For 28 of the last 32 years we have had a Republican president and/or a Republican majority in either the House or Senate.

We had our chance: RON PAUL!

“But Republican’s pick better judges.” No they don’t. When GW Bush left office, seven of the nine supreme Court justices were appointed by Republicans, as were about two-thirds of all federal judges. And the federal bench was still an unholy mess.

Is this “less government and more freedom”?

If you liked Bush, you ought to love Obama.

And if you like Obama, you really should love the next Republican president, who will very probably radically outspend and outtyrannize Obama. I have heard it said that the modern presidency is like one big Fibonacci Sequence: every president builds on his predecessor’s legacy.

Every bad thing that is happening in this country has been happening since for at least 100 years. Merely replacing one guy in one office in a nation of 320 million people will solve nothing. 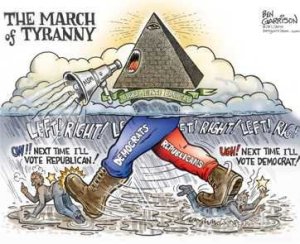 So what should you do? Do what I did in 1992: walk off the two-party plantation. You have no “duty” to vote for the “lesser of two evils”. Don’t just listen to what candidates say. Look VERY CAREFULLY at what they have done – not said, DONE! – in their past. That is all you have to go on. And if no “electable” candidate measures up, then vote for non-privileged candidate, such as one from the Libertarian or Constitution Party. This applies to the presidency all the way down to the town council.

And if no candidate on your ballot is truly pro-liberty, then just don’t vote. I have left lots of spots on my ballot blank in recent years. It is not a sin.

I would rather do the right thing and lose than do the wrong thing and win.

My name is Doug Newman. I live in Aurora, Colorado, just outside Denver. Food for the Thinkers is mostly about the connection between Christianity and libertarianism. Most Christians do not understand libertarianism. And most libertarians do not understand Christianity. Hopefully, this blog helps clear up those misunderstanding. Check out my old page at www.thefot.us And remember: When you let people do whatever they want, you get Woodstock. But when you let governments do whatever they want, you get Auschwitz.
View all posts by Food for the Thinkers →
This entry was posted in Uncategorized and tagged bush, obama, romney. Bookmark the permalink.

12 Responses to If You Liked Bush, You Ought to Love Obama