On November 9, 2012, police in Aurora, Colorado, detained 3000 innocent people for eight hours while searching an apartment building for a shooting suspect.

Gateway High School has 2275 students. Jewell Elementary School, almost a mile away from the building, has 525 students. When you add to these numbers the faculty and staff at the two schools, the total number of detainees probably exceeds 3000.

In June of this year, 40 innocent people were detained for two hours by Aurora police while they apprehended a bank robbery suspect.

I live in Aurora. This is very disturbing. When will it be my turn? When will I be detained and for how long for no other reason than I was in the wrong place at the wrong time?

In the wake of a virtual media blackout on this story – I only learned of it from a friend’s Facebook post – I am compiling whatever links I can related to this matter.

Oh I pray that I am not the only person in a city of over 300,000 people who is speaking out about this.

This has to stop! Here and now!

My blog links on the November lockdowns:

About the June episode: 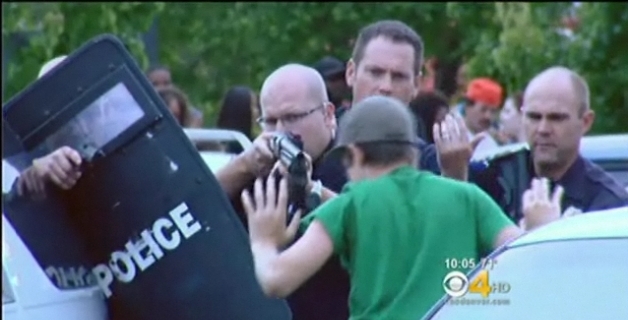 June 2, 2012 at Iliff and Buckley in Aurora. We have to let police stage mass detentions. There could be a gunman running loose in the area. It’s for the children.

My name is Doug Newman. I live in Aurora, Colorado, just outside Denver. Food for the Thinkers is mostly about the connection between Christianity and libertarianism. Most Christians do not understand libertarianism. And most libertarians do not understand Christianity. Hopefully, this blog helps clear up those misunderstanding. Check out my old page at www.thefot.us And remember: When you let people do whatever they want, you get Woodstock. But when you let governments do whatever they want, you get Auschwitz.
View all posts by Food for the Thinkers →
This entry was posted in Uncategorized and tagged aurora, detentions, gateway high school, jewell elementary school, lockdown, police, school. Bookmark the permalink.