Why Is Marijuana Illegal?

Why is marijuana illegal?

“Because it is bad for you,” say the moral nanomanagers of the world.

Meanwhile, out in real life, the Heart Attack Grill is alive and well and operating in Downtown Las Vegas. (Their other two locations in Dallas and in the Phoenix suburb of Chandler both closed voluntarily. The Chandler location did so after its 575-pound spokesman went to meet his Maker at age 29.) 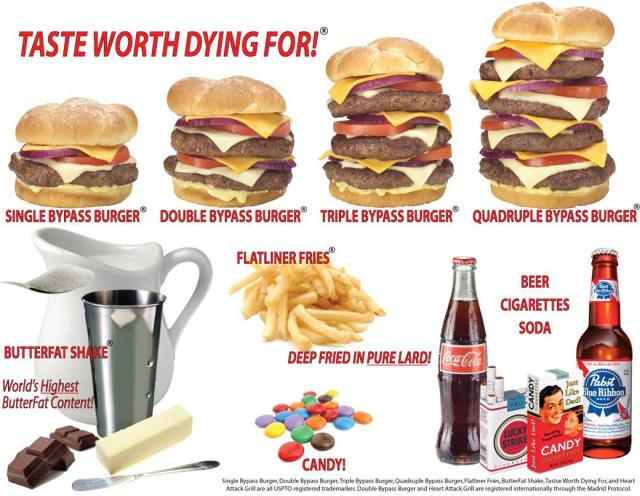 These menu items from the Heart Attack Grill are perfectly legal. A plant that God gave us in the eleventh verse of the Bible is not legal.

And why can this Arizona woman do this to herself without Ninja-clad tax-mainlining goons kicking down her door sans a judge’s warrant and spraying lead? (Did she ever make it to the Chandler Heart Attack Grill? It was only a 40-minute ride up I-10 from Casa Grande, where she lives.)

And why are so many prescription drugs with about 88 terrifying potential side effects each advertised on radio and TV every day? Consider something called NuVigil, that supposedly helps you stay awake if you are graveyarding it. The following is from NuVigil’s own website.

Contrast this with the side effects of marijuana: goofiness, munchies and an uncontrollable urge to vedge out to pre-Dark Side of the Moon Pink Floyd tunes.

Go sell your “gateway drug” jive somewhere else. People typically drink alcohol – which is far more fraught with peril – before they burn hippie lettuce. Why do we not draw the line at Olde Demon Rum? Or with diet soft drinks that are laced with aspartame? Better yet, why do we not do so with the absolutely damnable substance that is dihydrogen monoxide?

The War on Drugs and Plants that Uncle Sam Doesn’t Like is just a bigger, uglier and costlier version of what failed so miserably between 1920 and 1933.

And if you think this doesn’t effect you, think again. A government that will criminalize possession and consumption of a plant that probably grows wild in your zip code knows no limits on its power and will do absolutely anything to its subjects.

Just why is marijuana illegal?

11 Responses to Why Is Marijuana Illegal?