Will John Roberts’ supreme Court confirmation process be a slam dunk? Or will it be nasty, brutish and excruciatingly long, replete with lurid exposes of his undergraduate escapades and video rental records? 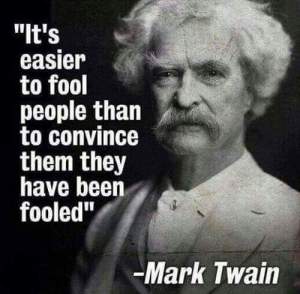 No matter what happens, do not get too jazzed about Mr. Roberts. If the Republican Party’s history of judicial nominations is any indicator, he will be a disaster. How do I know this? Let me explain.

The Bush spin machine tells us that We Must Vote Republican And Stand Behind President Bush And His Judicial Nominees Because If We Don’t Evil Diabolical Scum Of The Earth Liberal Democrats Will Put Their Activist Judges On The Federal Bench And These Judges Will Perpetuate Judicial Tyranny By Waging A Jihad Against America, Our Christian Heritage And Values, Motherhood, Norman Rockwell, Baseball, Hot Dogs, Apple Pie And Chevrolet By Legislating From The Bench And Imposing Their Radical, Morally Bankrupt, God-Hating, Perverted Secular Agenda On The American People.

THE HORROR! THE UNSPEAKABLE ABJECT HORROR!

Get a grip! Let’s get past the clichés and look at the history of nominations to the federal bench over the last few decades.

And we still have a rogue judiciary! Everything Republicans say they hate is still part of our legal, judicial and cultural landscape. We still have endless mind numbing decisions on things like school prayer, public displays of Christianity and the Pledge of Allegiance. Roe v. Wade is still very much with us and is unlikely to go away any time soon.

Did you know that five of the seven justices who voted “yes” on Roe were appointed by Republicans? Someone pointed this out to me recently and I thought I would do my own research. It turns out that Justices Brennan and Stewart were Eisenhower appointees, while Justices Burger, Blackmun and Powell were Nixon appointees.

So there you have it. Roe is not part of the godless Democratic legacy. It is part of the legacy of the GOP, which many GOP types want us to think is an acronym for God’s official party.

But if you support the Libertarian or the Constitution Party, you only aid and abet Democrats! I mean, would you rather have Al Gore or John Kerry picking judges? 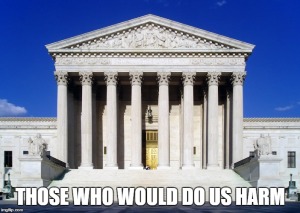 Has it mattered? Has it really mattered one iota? Not only have Republicans perpetuated Roosevelt’s socialist legacy and Wilson’s internationalist legacy, they have continued to nominate judges and justices indistinguishable from those that any Democrat would nominate.

The coming weeks will bring the predictable excursions into the mind and soul of Mr. Roberts. Network talking heads will conduct endless highfalutin interviews with law professors and representatives of all the usual big money pressure groups about Mr. Roberts’ judicial “temperament” and philosophy. It is so lobotomizing.

“The Constitution isn’t written in Chinese, Swahili, or Esperanto. It is in plain English. We don’t need anyone to translate or interpret for us. It isn’t even necessary to study the history of the adoption of the Constitution, since there’s nothing mysterious about its words.

”Phrases like ‘make no law’ or ‘shall not be infringed’ or ‘retained by the people’ or ‘reserved to’ are comprised of everyday words that require no search for ‘original intent’ or ‘penumbras.’”

“But, officer, was it really the original intent of the city council that the stop sign really meant for me to stop my car at that corner? Or might there be a deeper meaning hidden in the stop sign’s penumbras?”

To paraphrase Leona Helmsley, only little people need abide by the letter of the law.

Browne goes on to state:

“The Constitution means what it says it means — or it means nothing at all. And any judge who overrules the plain English of the Constitution is no judge at all — whether he’s been appointed by a Republican or a Democrat.”

As Rush Limbaugh says, words mean things. The words of the Constitution are no exception. Limbaugh and his ilk got much mileage out of Bill Clinton’s uncertainty as to the meaning of words like “alone” and “is.” They should invest similar energy on the confusion of supreme Court justices over the meaning of the words in the Constitution.

Consider the wording of the Tenth Amendment:

“The powers not delegated to the United States by the Constitution, nor prohibited by it to the States, are reserved to the States respectively, or to the people.”

If the Constitution does not authorize Uncle Sam to engage in a certain activity – those activities are spelled out in Article I, Section 8 – Uncle Sam cannot engage in it. Sahh-reee. There is, for example, no constitutional authorization for either a war on drugs or federal intrusion into the medical marketplace. Period.

So why, then, do apparently educated people give us insane – and, I maintain, godless – opinions like Gonzales v. Raich? In this case, the Court upheld the supremacy of federal laws prohibiting the use of medical marijuana over state laws permitting its use. 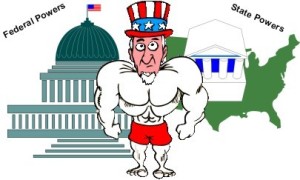 The Court relied on the Supremacy Clause in Article VI saying that the federal law superseded the state laws. The problem is that there is exactly zero constitutional authorization for such a federal law. It simply is not there! If the Court can resort to the Supremacy Clause whenever it wants, while ignoring other constitutional provisions it finds inconvenient, we might as well just perforate the Constitution and put it on a roll.

Four of the six justices in the majority on this ruling – Scalia, Stevens, Kennedy and Souter – were Republican appointees.

So there you have it again. Republican appointees disregard the words of the Constitution just as recklessly as Democratic appointees. Any claim to Republican intellectual or moral superiority over Democrats is part of the big, fat Republican supreme Court lie. Don’t fall for it!

America’s true constitution lies not on paper. It lies in the minds and hearts of its people. If the American people are ignorant about their freedom, unwilling to defend their freedom, and willing to sacrifice this freedom for temporal political gain, can they be said to have a constitution at all?

My name is Doug Newman. I live in Aurora, Colorado, just outside Denver. Food for the Thinkers is mostly about the connection between Christianity and libertarianism. Most Christians do not understand libertarianism. And most libertarians do not understand Christianity. Hopefully, this blog helps clear up those misunderstanding. Check out my old page at www.thefot.us And remember: When you let people do whatever they want, you get Woodstock. But when you let governments do whatever they want, you get Auschwitz.
View all posts by Food for the Thinkers →
This entry was posted in Uncategorized and tagged democrat, election 2016, judges, obama, republican, scalia, supreme Court. Bookmark the permalink.