There is just so much wrong here.

Police responded to a domestic violence call at the home of George Hitcho in Freemansburg, in northeastern Pennsylvania.

Said Hitcho: “He tried to kill my dogs and pointed a gun in my face,” Hitcho said, according to the documents. “I do not care if you a cop or not …Unbelievable.”

According to this article: “Freemansburg Police Chief George Bruneio testified he saw Lasso, 31, struggling with the animals and yelled at the nine-year police veteran to shoot one of the dogs.”

I am sick of hearing all the time about police officers “struggling” with dogs and using this as a pretense to shoot them. Mailmen, UPS and FedEx drivers and utility meter readers get barked and snarled at every day, and when do you ever hear about any of them shooting dogs? 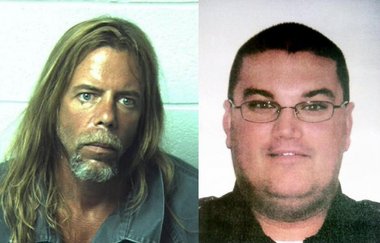 A jury convicted Hitcho of first-degree murder. Hitcho is being sentenced to death.
Northampton County District Attorney smugly proclaimed: “I think the jury’s verdict sends a high affirmation that police officers are off limits.”

This story is from 2012. Hitch announced in January that he will get a new attorney and appeal this death sentence. Let us pray that he prevails.

If Hitcho or anyone else doesn’t have the right to shoot back when they feel their life is threatened, then none of us have any rights. Period. Why even bother with a Second Amendment? It doesn’t matter if the person you feel threatened by rocks a blue uni and mainlines donuts and tax money.

This story is sad from beginning to end. (And, no, I am not happy that Lasso is dead.) The police are the business end of the government and they are totally out of control. It does little good to moan and groan about recklessness in Washington, while at the same time ignoring what is happening on the streets of your own town.

My name is Doug Newman. I live in Aurora, Colorado, just outside Denver. Food for the Thinkers is mostly about the connection between Christianity and libertarianism. Most Christians do not understand libertarianism. And most libertarians do not understand Christianity. Hopefully, this blog helps clear up those misunderstanding. Check out my old page at www.thefot.us And remember: When you let people do whatever they want, you get Woodstock. But when you let governments do whatever they want, you get Auschwitz.
View all posts by Food for the Thinkers →
This entry was posted in Uncategorized and tagged freemansburg, hitcho, lasso, police brutality. Bookmark the permalink.