Thou Shalt Have No Other Gods before the Rockford Zoning Department

Winters in Rockford, Illinois, are by nature very cold. This past winter was downright excruciating.

Pastor Dave Frederick of Rockford’s Apostolic Pentecostal Church responded to this by doing as commanded in Matthew 25:40-46 and opened the doors of his church to the city’s homeless. Up to 50 people would sleep at the church some nights, getting blankets, pillows and warm meals.

Enter the Rockford zoning authorities. As the above Alternet article states: 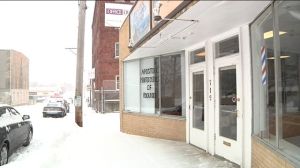 “The only other shelter in town, Rockford Rescue Mission, is often full and doesn’t allow alcohol and drugs, so people who drink or do drugs can’t go there anyway.

“‘Everybody that left is back out on the street,’ says Thomas Stirling, who volunteers at the shelter. ‘It still drops below freezing at night. It’s a really sad thing.’

“Pastor Frederick says that they’d found people under bridges, on park benches, and that’s likely where they’ll return. ‘What are they going to do? Go back to that bridge? One man is getting a tent and going into the woods.’ 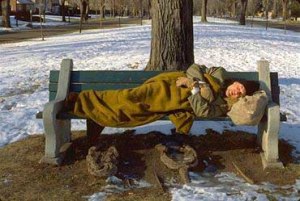 “Given that the woods, park benches and the undersides of bridges likely do not meet zoning requirements for shelter either, the city’s official explanation has raised suspicions. The Pastor thinks they’re using the zoning law as a pretext to disperse the homeless from the area.”

An act of Christian charity is punished by the iron fist of the state. And it is not just the left-wing economic regulatory state that is doing damage here.

The article goes onto say:

“Laws that ban sitting or lying down in public, camping, and panhandling enable police to move the homeless out of the nice parts of town. Going after groups who feed or shelter the homeless can serve a similar function, preventing them from assembling in certain spaces.”

How many of these people will at some point in the future be harassed, abused or worse by the police, who are second only to the military as the right’s favorite agency of the state?
When will Christians realize that the true battle is not between right and left, but rather between the state and the individual?

God’s very First Commandment reads in part: “Thou shalt have no other gods before me.” – Exodus 20:3

I have written several times over the years on both of my blogs that, at some point, the state always winds up saying: “Thou shalt have no other gods before me. And even if you do try and do the Christian thing, I will punish you anyway. 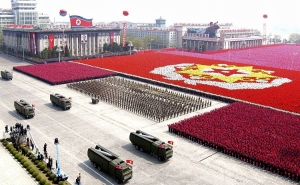 The ultimate expression of the state-as-deity can be found in North Korea. And while Rockford is certainly not North Korea, excessive state power is being wielded there in a most unchristian manner.

Come to think of it, excessive state power is always unchristian.

My name is Doug Newman. I live in Aurora, Colorado, just outside Denver. Food for the Thinkers is mostly about the connection between Christianity and libertarianism. Most Christians do not understand libertarianism. And most libertarians do not understand Christianity. Hopefully, this blog helps clear up those misunderstanding. Check out my old page at www.thefot.us And remember: When you let people do whatever they want, you get Woodstock. But when you let governments do whatever they want, you get Auschwitz.
View all posts by Food for the Thinkers →
This entry was posted in Uncategorized and tagged Bible, Christianity, First Commandment, homeless, north korea, rockford, zoning. Bookmark the permalink.