Was Jesus a libertarian?

If Jesus were alive in America today, would He be a Republican or a Democrat?

Would He be a socialist, a pacifist, and promote every sort of social deviance? Or would He establish a police state in order to eradicate all social ills?

To hear it from the mainstream media, as well as from many churches, Jesus would favor one or the other of these scenarios. Indeed, many preachers are almost as eager as politicians to tell us that how we vote is a barometer of our religious faith.

Or, would Jesus be a libertarian? He just may be, if you spell it with a small “l”. Just as a chaplain leading a team in pre-game locker room prayer asks for more important things than a victory in the upcoming game, it would be frivolous to ask God for Libertarian political victories. Instead, what I mean here is that Jesus did not have a political agenda. He never put a gun at anyone’s head and said, “Follow Me!”

As He said to the church in Laodicea, “Behold, I stand at the door, and knock: if any man hear my voice, and open the door, I will come in to him, and will sup with him, and he with me.” (Revelation 3:20) Even though this was a wayward and spiritually weak church, Jesus would not force His way back in. Rather, He would re-enter by invitation only… 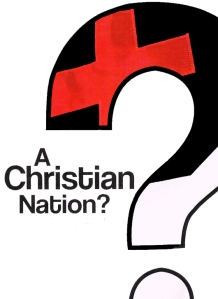 This is what Christianity is all about. Individuals become Christians voluntarily by accepting Jesus as their Lord and Savior. It is important to note that only individuals can become Christian. There is no such thing as a “Christian nation.” Jesus’ mission was not to force us to stop sinning, but to show us the way to a right relationship with God. This reconciliation comes as a result of individual choice.

A Christian friend of mine left the Libertarian Party because, he said, “Libertarians are diehard relativists.” If this is so, then Jesus was a diehard relativist. His Kingdom was not of this earth. (John 18:36) Jesus had no intention of being a political threat to the Roman regime. To be sure, Jesus was powerfully direct about what was right and wrong in God’s eyes. However, He never suggested that secular government could remake society along godly lines. When He tells us to “Render therefore unto Cæsar the things which are Cæsar’s.” (Matthew 22:21), He does not grant Caesar unlimited license to determine what is Caesar’s, much less that Caesar should arrogate unlimited power in God’s name.“

There is no Biblical promise of some utopian society without poverty, racism, drugs, illiteracy, or any of a host of other social ills, much less that secular government can bring about such a society. And yet every day, politicians ask for greater government efforts toward eradicating these problems. It is doubly discouraging when church leaders do the same. Where do our church leaders get the idea that secular government can accomplish what God Himself never promises? They certainly do not get it from the Bible.

Christians who wish to return America to its biblical roots by force of secular law need to recall the time before they accepted Jesus. Even if they were not hostile toward Christianity, they very probably resented the idea that people wanted to force Christianity on them. Indeed, the political impulse is so pervasive among Christians, that millions of people perceive Christianity as something it manifestly is not: a means of coercion and social control.

Acts 2:42-45 describes a First Century community of Christians in Jerusalem who “And they continued stedfastly in the apostles’ doctrine and fellowship, and in breaking of bread, and in prayers … and had all things common; and sold their possessions and goods, and parted them to all men, as every man had need.” This passage is often used to propagate the lie that the Bible promotes socialism. However, this community was a product of divine inspiration, rather than statist fiat. 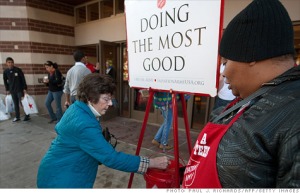 When Jesus says to give to the poor, He does not mandate a welfare department and expanded powers for the tax police. In fact, He repeats the Old Testament commandment against theft (Matthew 19:18), thus putting His stamp of approval on private property. The New Testament also states that, “that if any would not work, neither should he eat” (II Thessalonians 3:10) and that “Every man according as he purposeth in his heart, so let him give; not grudgingly, or of necessity: for God loveth a cheerful giver.” (II Corinthians 9:7). God asks for a voluntary contribution of 10 percent of our earnings, whereas Caesar puts a gun at our heads for half of our earnings.

In his classic book Mere Christianity, C.S. Lewis describes “the real snag” in creating a Christian society: “Most of us are not really approaching the subject in order to find out what Christianity says: we are approaching it in the hope of finding support from Christianity for the views of our own party… A Christian society is not going to arrive until most of us really want it: and most of us are not going to want it until we become fully Christian.” This will not happen until enough individuals choose to become Christians. Even then, while our social ills may abate, they will not disappear.

“Now hold on there, Newman,” you are saying. “Wait just a cottonpickin’ minute. Aren’t you cherry picking from Christianity to find support for the views of your party.” Well, my party is unique among political parties in that it is consistent in its commitment to a philosophy which says, among other things, that government cannot solve problems, and that we should therefore not count on it to do so. Jesus, likewise, never suggested that we look to the government to solve our problems.

Should Christians act on their very real concerns about abortion, poverty, education, drugs, racism, crime, family breakdown, etc.? Absolutely, as “faith, if it hath not works, is dead.” (James 2:17) The Bible never suggests, however, that we can rebuild society through politics. The works to which the Bible exhorts us involve taking care of individual needs and spiritual hurts voluntarily. Christians should be guided at all times by the words of Zechariah 4:6: “Not by might, nor by power, but by my spirit, saith the Lord of hosts.” Doing so will prove extremely beneficial both for America’s spiritual health, as well as for the tarnished image of Christianity in a nation that has forgotten God.

My name is Doug Newman. I live in Aurora, Colorado, just outside Denver. Food for the Thinkers is mostly about the connection between Christianity and libertarianism. Most Christians do not understand libertarianism. And most libertarians do not understand Christianity. Hopefully, this blog helps clear up those misunderstanding. Check out my old page at www.thefot.us And remember: When you let people do whatever they want, you get Woodstock. But when you let governments do whatever they want, you get Auschwitz.
View all posts by Food for the Thinkers →
This entry was posted in Uncategorized and tagged Christian, Jesus, libertarian. Bookmark the permalink.

3 Responses to Was Jesus a libertarian?