Go Experience Combat Yourself, and THEN Tell Me about PTSD

Ever since I served as an infantryman in the first world war, I have had a great dislike of people who, themselves in ease and safety, issue exhortations to men in the front line.

We all have opinions. Some of us have more than others. This is not about your right to your opinion, but, rather, the value of your opinion.

Barton tells soldiers who have been through battle to “come back guiltless” and that they are in the “faith hall of fame”.

Whenever I hear a politician, media hack, pastor or anyone else who shapes public opinion advocating war, the first thing I do is check their military record. Neither Barton nor Copeland has ever served a day in the military. Surprise!

The left has its limousine liberals who stand in eternal solidarity with the downtrodden masses from their brownstones in Manhattan and their cribs in Malibu. The right has its chicken hawks.

If they had merely said what the coach of their favorite team, or the manager of their favorite restaurant or even the president of the United States should have done in a particular situation, that would be one thing. But here they are talking about combat.

War, for Barton and Copeland and their ilk, is a pornographic fantasy. For many – not all, but many – of those who actually experience combat, war is a grotesque, soul-torturing and life-changing reality. Most who march off to war do so very idealistically. However, many who come back from war think differently. War is like any other government program. Those who advocate it are in total denial about what it actually means at the retail level.

Pastor Chuck Baldwin has written the following: “To those who are engaged in war, the consequences can be nightmarish! Arms and legs cut off. Eyes put out. Flesh burned. Intestines ripped out. Backs broken. Skulls crushed. Lives lost. Families torn apart. Homes destroyed. Children left without parents. Parents never able to see their children again. Wives without husbands. Husbands without wives. Souls snuffed into eternity. Emotional scars that never heal. These are the realities of war. And this is what the neo-cons who profit from war never have to see up close and personal.”

Fred Reed, who is legally blind in one eye after being shot in Vietnam writes: “In wars, there are many enlightening things to see. For example, the Marine with a third of his face and half a lung, going ku-kuk-kuk as red gunch rolls out of his mouth and he drowns in his blood. Ruined or dying teenagers whimpering the trinity of the badly wounded, Mother, wife, and water. The brain-shot guy jerking like an epileptic as he tries not to die. Ever see brain tissue from gunshot? I have. It makes a pink spew across the ground. Like strawberry chiffon.”

In the movies, General Patton asks the troops to imagine “(putting) your hand into a bunch of goo that a moment before was your best friend’s face.”

The opening scene from Saving Private Ryan is not gratuitous.

Patton also said, “The bilious bastards who wrote … for the Saturday Evening Post don’t know anything more about real battle than they do about fornicating.” The same goes for Barton and Copeland and so many like them. Their personal lives may very well be beyond reproach. However, know absolutely nothing about war!

IF YOU ARE A VETERAN CONTEMPLATING SUICIDE, GET HELP! TALK TO SOMEBODY!

Earlier this year, Forbes magazine reported that 22 veterans per day committed suicide. Military.com reported that, in 2012, more military members died from suicide than died in combat. Can you name ten of them? Can you name one?

But you can sure name your favorite chicken hawk, war pansy politician or media whore who profits most handsomely from promoting perpetual war.

Copeland, Barton and so many other influential evangelicals commit blasphemy by equating the American military with the Lord’s army in the Old Testament. America is not ancient Israel. Our military is not the Army of God. And the American president is not God. (And I don’t just mean the current president. None of them are.)

Yes, there were divinely ordained wars in the Old Testament. However, because of Israel’s sin and disobedience, God would eventually allow Israel to be overrun and conquered by several hostile enemies. If God was not unconditionally on Israel’s side, what makes us think God is unconditionally on America’s side?

Numerous imperial armies have marched into battle proclaiming that God was on their side. Among them were the Romans, Byzantines, Czarist Russians and the Nazis. Please note that all these empires are out of business.

America aborts one million babies per year. God is not on our side.

And where is America in the Bible? Revelation 18, I believe. And it isn’t pretty. The Bible mentions numerous nations by name, most of which you have never heard of and that faded into oblivion centuries before Christ. It mentions Palestine, Egypt, Syria, Libya and Persia by name, but not America. How important does God truly think America is?

And can a “Christian nation” be a “superpower”? Not according to Matthew 4:8-10. 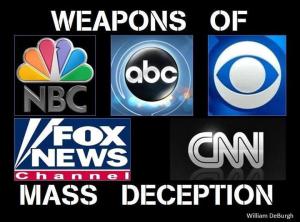 What is really sad is that hustlers like Barton, Copeland, John Hagee, James Dobson, Pat Robertson, etc. have such large followings among those who profess to follow Christ. Why are so many who claim to follow the Prince of Peace such rabid warmongers? Why do so many believe every American war and act of war is righteous and “just”? Why do so many believe “American exceptionalism” is a license for America to wage endless war and that God favors America over all other nations?

The Bible prophesies this in II Timothy 4:3-4: “For the time will come when they will not endure sound doctrine; but after their own lusts shall they heap to themselves teachers, having itching ears; And they shall turn away their ears from the truth, and shall be turned unto fables.”

My name is Doug Newman. I live in Aurora, Colorado, just outside Denver. Food for the Thinkers is mostly about the connection between Christianity and libertarianism. Most Christians do not understand libertarianism. And most libertarians do not understand Christianity. Hopefully, this blog helps clear up those misunderstanding. Check out my old page at www.thefot.us And remember: When you let people do whatever they want, you get Woodstock. But when you let governments do whatever they want, you get Auschwitz.
View all posts by Food for the Thinkers →
This entry was posted in Uncategorized and tagged Bible, chicken hawks, Christianity, copeland, david barton, guilt, Jesus, ptsd, veteran suicides, war. Bookmark the permalink.

6 Responses to Go Experience Combat Yourself, and THEN Tell Me about PTSD