Los Papeles Por Favor (Or, the Dangers of Immigration Reform)

A few weeks ago on this blog, I ran a rehash of an article I had originally written in 2001 in which I warned of the dangers to domestic liberty stemming from overly aggressive immigration control.

Policing borders in the name of national defense is one thing. The dangers comes when “immigration reform” becomes an excuse for domestic tyranny. 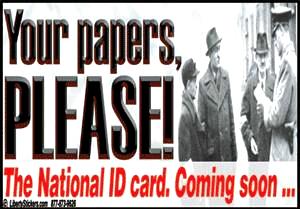 Today, I read this article by Shahid Buttar. While Mr. Buttar certainly appears to come at things from the left, his concerns here are extremely valid. The dangers to domestic liberty from the immigration reforms being proposed in Congress right now are quite significant.

Conservatives say they hate government, except when it comes to their menu of favorite programs. Immigration reform is probably their third favorite, right behind war for empire and the War on Drugs.

However, the immigration reforms that are currently being considered in Congress are fraught with peril. As with any proposed government program, you have to ask “How much do you want to pay?” You must ask not only about the financial cost, but also about the cost to your fundamental liberty. As Mr. Buttar points out, the cost is simply too high.

The libertarian approach to this involves turning off the welfare tap. This includes “free” housing, education and healthcare. The benefits would be threefold: 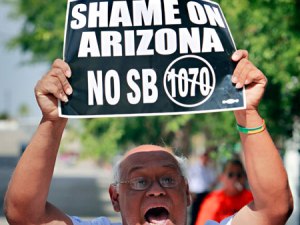 Libertarians don’t talk in terms of solutions, as we know utopia is not an option. There are no perfect solutions. And while a free society would certainly not be perfect, it would be the best possible society.

Let the principles of individual liberty be our guide when we consider what to do about immigration.
~~~~~~~~~~~~~~~~~~~~~~~~~~~~~~~~~~~~~~~~~~~~~~~~~~~~~~~~~~
“These rights, I protest, are not mere second-class rights but belong in the catalog of indispensible freedoms. Among deprivations of rights, none is so effective in cowing a population, crushing the spirit of the individual and putting terror in every heart. Uncontrolled search and seizure is one of the first and most effective weapons in the arsenal of every arbitrary government.” — Supreme Court Justice Robert Jackson, Brinegar v. United States

My name is Doug Newman. I live in Aurora, Colorado, just outside Denver. Food for the Thinkers is mostly about the connection between Christianity and libertarianism. Most Christians do not understand libertarianism. And most libertarians do not understand Christianity. Hopefully, this blog helps clear up those misunderstanding. Check out my old page at www.thefot.us And remember: When you let people do whatever they want, you get Woodstock. But when you let governments do whatever they want, you get Auschwitz.
View all posts by Food for the Thinkers →
This entry was posted in Uncategorized and tagged civil liberties, immigration, sb 1070. Bookmark the permalink.