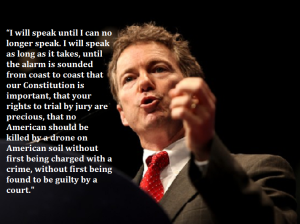 Before you jump on the Rand 2016 bandwagon, you would do well to take a few minutes and read this short article. Rand Paul said many significant things in his 13-hour filibuster last week. However, just as significant is what he didn’t say.

Rand Paul is our best Senator. This says a lot more about the Senate than it does about Rand Paul. As someone once said about the former Indiana Hoosier basketball coach Bobby Knight, he has his good points. The problem, though, is his bad points.

902 wins. 3 national titles. One of the cleanest programs in college hoops. Bobby Knight’s temper and boorishness, however, were legendary. Here, in a 1985 game against Purdue, Knight throws a chair onto the court to protest a call.

As someone who has deviated very significantly from what I was raised to believe in politically, I stand by Rand’s right not to be a clone of his father. However, just as way too many people blindly follow party labels, too many of Ron Paul’s followers may be too ready to follow anyone with the last name Paul.

Be careful here. Stand with Rand when he is right. Don’t stand with him when he is wrong.

As someone said to me many years ago, put your trust in principles, not in people. For people will fail you, while principles won’t.

My name is Doug Newman. I live in Aurora, Colorado, just outside Denver. Food for the Thinkers is mostly about the connection between Christianity and libertarianism. Most Christians do not understand libertarianism. And most libertarians do not understand Christianity. Hopefully, this blog helps clear up those misunderstanding. Check out my old page at www.thefot.us And remember: When you let people do whatever they want, you get Woodstock. But when you let governments do whatever they want, you get Auschwitz.
View all posts by Food for the Thinkers →
This entry was posted in Uncategorized and tagged drones, filibuster, rand paul, ron paul. Bookmark the permalink.

8 Responses to Rand Paul’s Filibuster: Don’t Get Too Excited