“You Have the Right to Remain Silent” … At Least for Now

This case – Salinas v. Texas – deserves special attention. From this short article comes the following: “The Supreme Court on Friday agreed to consider whether a suspect’s refusal to answer police questions prior to being arrested and read his rights can be introduced as evidence of guilt at his subsequent murder trial.”

If you can be presumed guilty until proven innocent for any reason whatsoever, and sent to prison without the Due Process protections of the Fifth and Sixth Amendments, the game is over.

If only we had heard one percent as much about this during 2012 as we did about the absolutely meaningless presidential election. Trust me, neither Obama nor Romney cared one iota about this issue. You are far more likely to encounter a policeman than you are to meet the person – federal, state or local – for whom you voted.

If you neither know your rights or are not willing to assert these rights when accused by the authorities of wrongdoing, nothing else really matters. The greatest threat to our freedom and security comes not from some foreign land, or even from Obama, monster that he is. Rather, it comes from an ignorant and spineless populace. 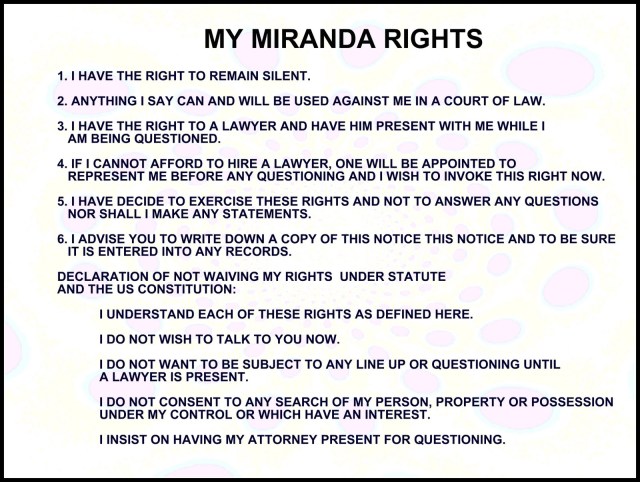 My name is Doug Newman. I live in Aurora, Colorado, just outside Denver. Food for the Thinkers is mostly about the connection between Christianity and libertarianism. Most Christians do not understand libertarianism. And most libertarians do not understand Christianity. Hopefully, this blog helps clear up those misunderstanding. Check out my old page at www.thefot.us And remember: When you let people do whatever they want, you get Woodstock. But when you let governments do whatever they want, you get Auschwitz.
View all posts by Food for the Thinkers →
This entry was posted in Uncategorized and tagged due process, fifth amendment, miranda rights, right to remain silent. Bookmark the permalink.