Do We HAVE to Have a President?

Monday is President’s Day. Why do we celebrate it? And do we even have to have a president?

The presidency, as ordained by the U.S. Constitution, is an insignificant office. The president is the chief executive officer of a branch of government whose activity is severely limited. These powers are spelled out in 329 words in Sections 2 and 3 of Article II and restrained by the Tenth Amendment. The only power the president can exercise unilaterally over people is the power to grant pardons and reprieves. He cannot make laws and he cannot rule by executive order.

I stopped having a president on April 1, 2001, when my Naval Reserve retirement became effective. The occupant of that office does not preside over me in any manner that I acknowledge. He doesn’t preside over you either. And, no, you don’t have to “do what he says”.

Presidents going back to George Washington, who led federal troops to the Pittsburgh area to collect whiskey taxes, have overstepped their bounds. The federal government, especially since the presidency of Abraham Lincoln, has grown into such a monstrosity that it still doesn’t matter who is its CEO. I found it slightly amusing after Hurricane Harvey when Trump said he would visit Houston when it would not cause disruption. Wherever the president goes nowadays, he causes is massive disruption, with roads blocked and traffic redirected everywhere.

Is this merely security theater or do that many people seriously want to kill the president? If, God forbid, the latter, it ought to serve as some sort of reality check. Perhaps there is a reason that whoever holds the office president, whoever that may be, is so widely hated.

When the president order any of us incarcerated indefinitely without any semblance of due process as well as rain bombs all over the planet, whoever holds that office needs to be hated and hated widely for no other reason that they sought that office more aggressively than anyone else.

I also found it amusing when conservatives complained that Obama – aka King Putt – played too much golf and ignored his presidential duties. Did they want him – him?MAObama? – doing more of everything they claimed to hate so much? 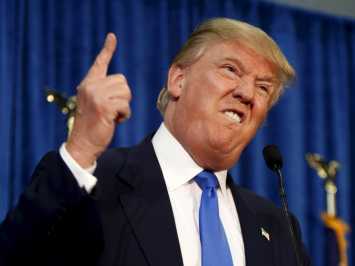 Is it just me, or does he look like NFL legend John Elway?

So let the president play golf, or buy the first box of Girl Scout cookies, or throw out the first pitch on  Opening Day. And, yes, let him visit disaster areas as long as he doesn’t use these disasters as reasons to spend more stolen, i.e. taxpayer, money or expand federal police powers. Let him spend as much time as possible away from the levers of power.

As Lew Rockwell wrote in the mid-1990s: “The presidency must be destroyed. It is the primary evil we face, and the cause of nearly all our woes. It squanders the national wealth and starts unjust wars against foreign peoples that have never done us any harm. It wrecks our families, tramples on our rights, invades our communities, and spies on our bank accounts. It skews the culture towards decadence and trash. It tells lie after lie. Teachers used to tell schools kids that anyone can be president. This is like saying anyone can go to Hell. It’s not an inspiration; it’s a threat.”

While constitutional government such as that promoted by Ron Paul would be an immeasurable improvement over anything anyone reading this has ever experienced, I really think it was a mistake to depart from our original governing document: the Articles of Confederation. The anti-federalists warned us repeatedly that the proposed constitution would consolidate more power at the federal level and would eventually devolve into tyranny. They were right.

Just a few of the benefits of the Articles of Confederation were that it neither granted any federal taxing power nor created a federal court system. Moreover, the president presided over the congress and had no assigned duties. And the president was elected by the congress. John Hancock was elected president for 1785 and never showed up to take the job. Hence, he was the greatest president.

At this time, America was in a struggle against the world’s pre-eminent military power. And, yet, the Continental Army, Navy and Marine Corps prevailed without a president as commander-in-chief.

This arrangement reminds me of my high school class president, a fellow WordPress blogger and all-around cool guy. He exercised no power over us, just like the president under the Articles of Confederation. (And we were quite the libertine bunch.)

I frequently cite I Samuel 8:4-20 as being parallel to contemporary America. The children of Israel clamored for a secular political king. God said, in effect: “I’ll let you have the king you say you want. But you’ll be sorry you asked.” Later, in Hosea 13:11, God says that He did this out of “anger”. A political chief executive was a curse, not a blessing.

Thomas Jefferson once remarked that “Resistance to tyrants is obedience to God.” Demanding a tyrant is rebellion against God.

Just like everything else in Washington, even the discharge of the least of the president’s constitutional duties grows biglyer and uglier all the time. That so many millions of people give it such an undue amount of emphasis bodes ill for what people keep telling me is a free country.

Indeed, Kevin Williamson writing in National Review in 2014, described the State of the Union as “a hideous, dispiriting, ugly, monotonous, un-American, un-republican, anti-democratic, dreary, backward, monarchical, retch-inducing, depressing, shameful, crypto-imperial display of official self-aggrandizement and piteous toadying, a black Mass during which every unholy order of teacup totalitarian and cringing courtier gathers under the towering dome of a faux-Roman temple to listen to a speech with no content given by a man with no content, to rise and to be seated as is called for by the order of worship”.

Mobutu Sese Seko was the unspeakably brutal dictator of the Congo from 1965 until shortly before his death in 1997. This was not his given name, but an alias. It was short for Mobutu Sese Seko Nkuku Ngbendu Wa Za Banga. This translates as “The all-powerful warrior who, because of his endurance and inflexible will to win, goes from conquest to conquest, leaving fire in his wake.”

Sometimes, I think this is what the American people desire in a president. The real problem, as always, lies not in the presidency, but among the people. Someday, we, like the children of ancient Israel, will also be sorry we asked.

My name is Doug Newman. I live in Aurora, Colorado, just outside Denver. Food for the Thinkers is mostly about the connection between Christianity and libertarianism. Most Christians do not understand libertarianism. And most libertarians do not understand Christianity. Hopefully, this blog helps clear up those misunderstanding. Check out my old page at www.thefot.us And remember: When you let people do whatever they want, you get Woodstock. But when you let governments do whatever they want, you get Auschwitz.
View all posts by Food for the Thinkers →
This entry was posted in Uncategorized and tagged Articles of Confederation, Constitution, obama, President's Day, State of the Union, Trump. Bookmark the permalink.