The Three Unequal Branches of Government

Once we let that phrase get accepted into the narrative, it paralyzes our ability to argue against executive usurpation and judicial overreach. 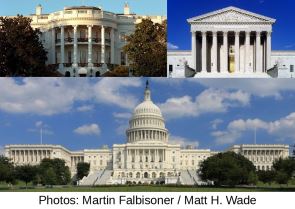 I expect we’ve all heard the phrase, “three coequal branches” used to describe the composition of our federal system of government. In fact, we’ve probably heard it so many times that we don’t even pay attention, we just accept it as fact and move on. But, is it true? Are the three branches of our federal government really “coequal?”

When that phrase popped up in an article that I was reading a few nights ago, something rose up inside of me and said “no, the three branches are not coequal.” When I found the phrase being used in another article the next day, I started to ponder just how unequal the branches of our federal government really are.

The three branches of our federal system of government are legislative (Congress), executive (President) and judicial (Supreme Court). This is the order in which they appear in the U.S. Constitution