Naeschylus Vinzant was nobody’s angel. His rap sheet, which dated back to 1994, included arrests for attempted homicide, assault and felony menacing. In August 2014, he was arrested on a domestic violence case on suspicion of assault, theft and violating parole.

He was out on parole again on Friday March 6, and was wanted for violating the terms of that parole. This was when Vinzant, who was unarmed, was fatally shot by Aurora Police officer Paul Jerothe.

It has been two weeks now, and the Aurora Police Department has offered no explanation as to why it was necessary for Jerothe to kill Vinzant. Why? (Here is their Facebook post naming Jerothe as the killer. And here is their only other update on the episode.)

Had someone other than a member of the punitive priesthood been accused of taking Vinzant’s life, he would have been apprehended immediately and shamed relentlessly by the media. However, Jerothe’s status as a police officer evidently affords him special immunity.

In the words of one of my favorite philosophers, Matt Foley, “Well LA-DEE FRIGGIN’ DAA!” Oh that a non-cop should have the luxuries of “decompressing” and “processing.”

And then the Post, which is almost always wrong, asks a most pungent question:

“Would investigators in any other deadly shooting allow a suspected shooter to wait so long before talking to police?”

The Aurora Sentinel is the only other local media outlet to have asked any serious questions of the Aurora PD in this matter.

Again, why was Vinzant shot and killed?

And, yes, I know that Vinzant had an extensive criminal record. But that isn’t good enough. None of his priors, many of which were very ugly, constituted a reason to kill him. What specific act did he commit on March 6 near the corner of 12th and Memphis in Aurora that would prompt Jerothe to fatally shoot him?

In 1993, Aurora police did not see the need to shoot and kill Nathan Dunlap on the spot when they arrested him in connection with the Chucky Cheese killings.

In 2011, Aurora police did not see the need to shoot and kill Eric Holloway and Tiffany Ward when they arrested them in connection with the fatal shooting of a teenage boy 400 feet from my front door.

In 2012, Aurora police did not see the need to shoot and kill James Holmes on the spot when they arrested him in connection with the theater shooting.

In 2013, Aurora police did not see the need to shoot and kill Isabella Guzman on the spot when they arrested her in connection with – oh, this is Mansonesque – stabbing her mother 79 times thus killing her just a few blocks from my house.

(3 of these tragedies happened in my immediate neighborhood. And I lost a friend of many years in the theater shooting.)

And there are millions of Americans who are either in total denial about this or are just so slavishly devoted to the police as to give them a free pass no matter what.

As one person commenting on this article put it: “I don’t understand why there is an issue here. The officer was doing his job.” I heard the sentiments of millions of people when I read this.

NO! The officer WAS NOT doing his job! The job of the police is to apprehend violent offenders, not to summarily execute them. If the death penalty should ever be imposed – that is another topic – it should only be after due process for the defendant has been meticulously applied. 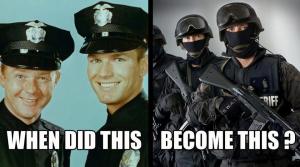 And if a cop should ever wield deadly force against a suspect he had damn well better be able to demonstrate that such force was necessary in self-defense.

And if he can’t do this, he should not be able to hide behind his badge and blue uniform.

I don’t “hate cops”. When they apprehend violent offenders, we should applaud them. When they direct traffic at accident scenes and around sporting events, we should thank them. But when they violate people’s rights, they need to be punished personally just like you or I would be. Badges, blue uniforms and doughnut Joneses don’t confer special privileges.

And the American people need to start realizing this and insisting that police be held to the same standards as everyone else. If we don’t, we should not be surprised when so many other segments of the government act so recklessly. Indeed, reckless government is exactly what America deserves.

Update: Jeffco prosecutors deciding whether to charge Jerothe.
Update: As of April 19, still no answers.
Update: Jerothe returns to work.

My name is Doug Newman. I live in Aurora, Colorado, just outside Denver. Food for the Thinkers is mostly about the connection between Christianity and libertarianism. Most Christians do not understand libertarianism. And most libertarians do not understand Christianity. Hopefully, this blog helps clear up those misunderstanding. Check out my old page at www.thefot.us And remember: When you let people do whatever they want, you get Woodstock. But when you let governments do whatever they want, you get Auschwitz.
View all posts by Food for the Thinkers →
This entry was posted in Uncategorized and tagged aurora, Dunlap, Holmes, Jerothe, police, Theater, Vinzant. Bookmark the permalink.