These Police State Measures Would Not Have Stopped Tim McVeigh

Nor do the security measures recently implemented at Wantagh High School on Long Island.

According to WCBS TV in New York:

Wantagh High School has banned backpacks and put other restrictions in place after school officials said a series of bomb threats were made against the school in recent weeks.

The new rules went into effect Tuesday and officials said they will remain in effect for the rest of the school year.

According to a letter from Superintendent of Schools Maureen Goldberg posted on the district’s website, no backpacks or large bags will be allowed inside the school.

In addition, all books and personal belongings must be kept in a clear bag and all bags will be checked as students enter the school in the morning and when returning to the building after lunch.

Restroom access will also be limited, Goldberg said. Students needing to use the bathroom will need to sign in and out, officials said.

While they are at it, why don’t the Wantagh authorities install naked body scanners on campus and implement random pat-downs? I mean, like, they could catch potential bombers. 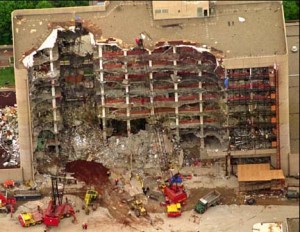 You don’t have to carry a gun or a bomb into a building in order to kill a lot of people. All that needs to happen is for some Tim McVeigh copycat wannabe to park a truck outside the school, detonate a bomb and kill a whole lot of people.

The entire “security” apparatus that has grown up in the last decade in America may make some people feel safe. However, it does not keep us safe at all.

My name is Doug Newman. I live in Aurora, Colorado, just outside Denver. Food for the Thinkers is mostly about the connection between Christianity and libertarianism. Most Christians do not understand libertarianism. And most libertarians do not understand Christianity. Hopefully, this blog helps clear up those misunderstanding. Check out my old page at www.thefot.us And remember: When you let people do whatever they want, you get Woodstock. But when you let governments do whatever they want, you get Auschwitz.
View all posts by Food for the Thinkers →
This entry was posted in Uncategorized and tagged mcveigh, police state, tsa, wantagh. Bookmark the permalink.