Pat Tillman Was Killed 10 Years Ago Today. Why? 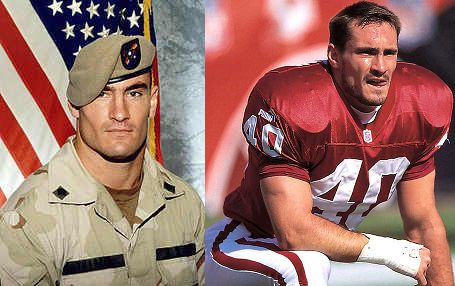 We are much less free.

We are much less safe.

Trillions of dollars have been added to the debt.

Since 9/11, the majority of the American people have accepted – in the name of “safety” and “security”: endless war, warrantless searches and spying, the suspension of habeas corpus, sexual assault as a condition of travel, indefinite detention without due process, severe restrictions on peaceful protest, rampant police brutality, surveillance drones in our skies watching our every move and putting cities on lockdown.

And none of it would prevent some whackjob from standing outside my building, detonating a bomb and killing dozens of people.

Why was Pat Tillman killed 10 years ago today?

My name is Doug Newman. I live in Aurora, Colorado, just outside Denver. Food for the Thinkers is mostly about the connection between Christianity and libertarianism. Most Christians do not understand libertarianism. And most libertarians do not understand Christianity. Hopefully, this blog helps clear up those misunderstanding. Check out my old page at www.thefot.us And remember: When you let people do whatever they want, you get Woodstock. But when you let governments do whatever they want, you get Auschwitz.
View all posts by Food for the Thinkers →
This entry was posted in Uncategorized and tagged pat tillman. Bookmark the permalink.

2 Responses to Pat Tillman Was Killed 10 Years Ago Today. Why?