Let’s Commit a Crime to Prevent a Crime … Really

I hope I don’t give American police any ideas here.

It was recently reported that police in the Afghan capital of Kabul are puncturing car tires in order to prevent car theft. Mind you, Kabul does not have a major problem with car theft. However, according to the article, “Security officials fear that militants could use stolen vehicles as car bombs.”

The possibility that militants could commit crimes is being used to justify the police committing crimes. Let’s commit a crime to prevent a crime! Am I the only person to whom this makes zero sense?

Closer to home, Norman Gurley was recently arrested near Cleveland because he had a compartment in his car which could have been used to transport drugs. Never mind that any of us could transport drugs in the trunk of our car or in the glove box or in the spare tire compartment. 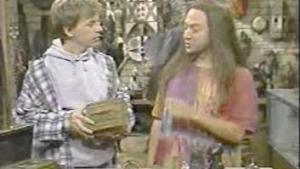 You put your weed in there.

Who here remembers this 1993 classic skit from Saturday Night Live? You can put weed in just about anything imaginable.

It reminds me of the 2002 science fiction thriller Minority Report starring Tom Cruise. This film depicts Washington, DC, in the year 2054, where the police had a division of “pre-crime” and apprehended people based on psychics’ foreknowledge that they could commit a crime. This division was hailed as a glorious success, as there had not been a murder in Washington, DC, in six years.

Any of us could do something wrong. Should we be arrested – and possibly executed – based on what we might potentially do? Imagine what that would look like in real life. Would you want to live in such a society?

Should those in a certain privileged segment of society have license to kidnap, steal from and kill innocent people based on what they might do? Should they be able to commit actual crimes in order to prevent theoretical crimes?

The very fact that you are reading this means that you have a tool that allows you to broadcast the following message to a very wide audience: NEWMAN IS A CHILD MOLESTER! Should you be pre-emptively prosecuted for the libel that you might hypothetically commit? Should SWAT teams go door-to-door executing no-knock raids in order to destroy these tools?

You put your weed in there.

One more time: should police be able to commit crimes in order to prevent crimes?

This makes as much sense as the army officer in Vietnam who said “We had to destroy the village in order to save it.”

This makes as much sense as when Rep. Paul Ryan (R-Hell) said “This bill offends my principles, but I’m going to vote for this bill in order to preserve my principles.”

This makes as much sense as the song that so many sang in the aftermath of 9/11: “We have to give up our freedom in order to preserve our freedom.”

And this makes as much sense as saying that people should fornicate in order to preserve their virginity.

My name is Doug Newman. I live in Aurora, Colorado, just outside Denver. Food for the Thinkers is mostly about the connection between Christianity and libertarianism. Most Christians do not understand libertarianism. And most libertarians do not understand Christianity. Hopefully, this blog helps clear up those misunderstanding. Check out my old page at www.thefot.us And remember: When you let people do whatever they want, you get Woodstock. But when you let governments do whatever they want, you get Auschwitz.
View all posts by Food for the Thinkers →
This entry was posted in Uncategorized and tagged afghanistan, drugs, kabul, marijuana, minority report, police, police state, saturday night live, weed. Bookmark the permalink.