It Takes a Taser to Raise a Child 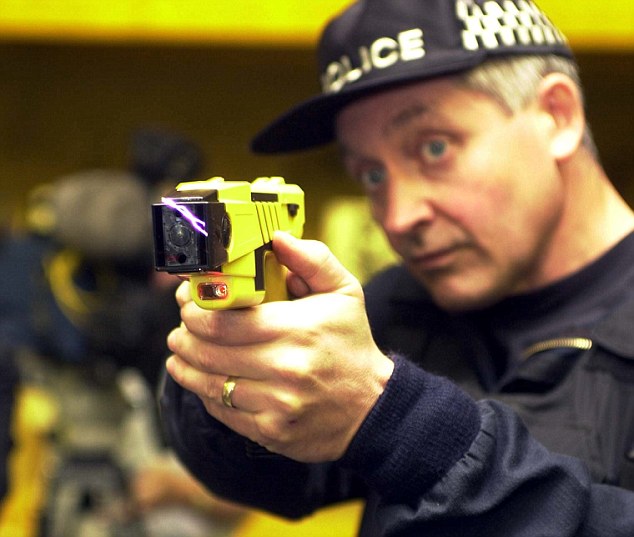 As if we had not heard enough recently about Taser-happy cops, this evening brought me three new stories. I got in from work this evening and logged on to my new favorite internet forum and read the following:

The Jacksonville Times-Union reported the following:

“One officer used a hold on her jaw and twisted her arm in a move designed to subdue a person but wrote in the report, “I feared further force on the suspect’s arm would cause her harm, [due to her small size] so I disengaged the suspect.”

“That’s when Officer G.A. Nelson used the Taser, according to the report.”

When a Miami-Dade police officer tried to take Sylvan back to school, she ran into traffic. At that point, the officer tasered her. Later, he said that this was for both his and her safety.

Sylvana Gomez must have been one awfully big and ornery 12-year-old.

Is it the Florida water, or the legacy of Janet Reno, the former state attorney general? (More on her in just a minute.)

Tasering is harsh and extremely painful. In each of the above cases, tasering constituted “cruel and unusual punishment.” tasering is a form of “pain compliance”, which is just a euphemism for torture. Tasering has killed people.

In each case, police claimed they tasered these kids for their own good. This is all too reminiscent of the army officer during Vietnam who claimed that it was necessary to destroy a village in order to save it.

The word “village” got me thinking. Presumptive Democratic presidential nominee Hillary Clinton (1) wrote a bestselling book titled “It Takes a Village to Raise a Child.” Hillary and her husband, Kim Jong-Bill, had very interesting ideas about how children – not Chelsea, but less privileged children — ought to be raised. (2) Consider the 20-plus innocent children who were incinerated at Waco. Consider the machine gun pointed at little Elian Gonzalez.

Last year, I stated that, “The same folks who laughed convulsively when Hillary Clinton stated that ‘It Takes a Village to Raise a Child’ evidently have no problem with the idea that it takes a police state to raise a child.”

I don’t want to give Hillary any ideas, but just imagine her coauthoring a book with her husband’s – Waco Willie’s – attorney general, Jackboot Janet Reno. The book would be called “It Takes a Taser to Raise a Child.”

(1) There is only one presidential contender who is unequivocally opposed to such police state measures. His name is RON PAUL. If we don’t elect him, this whole election will be absolutely meaningless.

(2) Just so you know I don’t favor either the Clintons or the Bushes, Jeb Bush’s kids don’t get tasered when they say “I don’t think so” to the authorities. His son wasn’t tasered when he resisted arrest in Austin in 2005. His daughter wasn’t tasered when she was caught with crack cocaine in violation of her probation in 2002.

My name is Doug Newman. I live in Aurora, Colorado, just outside Denver. Food for the Thinkers is mostly about the connection between Christianity and libertarianism. Most Christians do not understand libertarianism. And most libertarians do not understand Christianity. Hopefully, this blog helps clear up those misunderstanding. Check out my old page at www.thefot.us And remember: When you let people do whatever they want, you get Woodstock. But when you let governments do whatever they want, you get Auschwitz.
View all posts by Food for the Thinkers →
This entry was posted in Uncategorized and tagged children, police, police state, taser. Bookmark the permalink.

1 Response to It Takes a Taser to Raise a Child