“After watching Tucker (Carlson) last night it dawned on me what has been obvious all along – nobody in the media understands the Ron Paul movement at all – not even Tucker whom I would have thought would know better. In Tucker’s mind the only people who could possibly support Ron Paul are the relative handful of people in this country like him who “really understand” what Ron Paul is about, leftists who hate the war and tin foil hat wearing, ex-hippie conspiracy theorists. Well yes, we are all of those things, but we are also doctors and lawyers and soldiers and scientists.

“And we are civil libertarians and conservatives and liberals and democrats and republicans and libertarians and constitutionalists. We are shelf stockers at Walmart and high powered executives and self-employed small business owners and internet gurus. We are policemen and firemen and ditch diggers and even people on public assistance. We are black and white and asian and hispanic and some mixture of all of these things. We are people whose ancestors came over on the Mayflower and whose ancestors met those people when they arrived. We are people who became Americans six months ago. 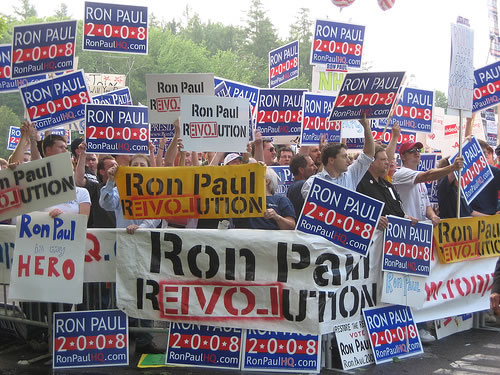 “We are young, pot-smoking college freshmen and guys who fought in Vietnam. We are people of virtually every possible stripe and persuasion who all have one single thing in common — we love this country and want to see the promise of what America was intended to be fulfilled, so that we can leave our children the American we grew up believing in — free and prosperous nation with justice and opportunity for all where any person who wants it and is willing to put in the effort has a reasonable chance of being whatever he or she wants to be and can make a better life for their children than they had. We want an America which is the land of liberty and where the idea of the pursuit of happiness means something.

“A place where courage and gumption and effort and creativity count for something — where the deck is not pre-stacked so that those on top can not lose no matter what they do and those on the bottom have little hope of winning no matter how hard they try. And where our leaders are people we can be proud of and who represent the best of what America is and not America at its basest and most venal. As for myself, I am proud to be associated with all of these types of Ron Paul supporters — even the wackiest among us. I happily welcome all the tin foil hat wearers and the hippies as well as the veterans and the old right conservatives and even the lefty liberals. When I start hearing stuff about needing to keep the movement “pure” then I know I’m talking to somebody who doesn’t understand the movement at all.”
—————————————————————-
If you would like to post this elsewhere – who knows why? – please email me and include a link to this URL. Thanks!
—————————————————————- 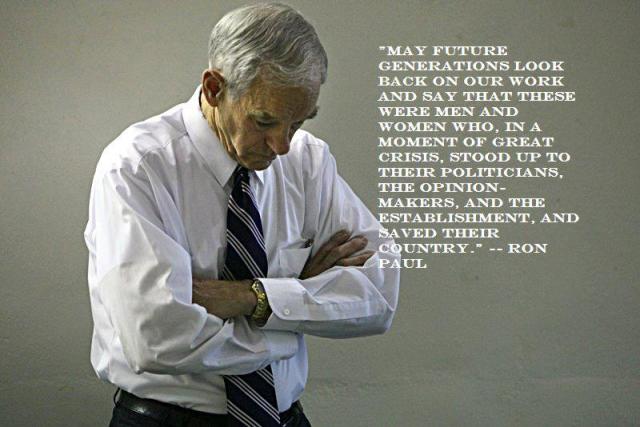 9 Responses to Just What Kind of People Support Ron Paul?