Yes, the Bill of Rights Applies to Terror Suspects

“The Constitution of the United States is a law for rulers and people, equally in war and in peace, and covers with the shield of its protection all classes of men, at all times, and under all circumstances. No doctrine, involving more pernicious consequences, was ever invented by the wit of man than that any of its provisions can be suspended during any of the great exigencies of government. Such a doctrine leads directly to anarchy or despotism.” — U.S. Supreme Court Justice David Davis, Ex Parte Milligan (1866)

I often hear that we should not “give rights to terrorists.” There is a problem with this statement that may sound philosophical and theological, but has enormous practical implications.

America was founded on the “self-evident” proposition that “all men are created equal, that they are endowed by their Creator with certain unalienable Rights.” Hence, the rights that we enjoy are gifts from God that are inherent in our humanity. They are not man’s to give or to withhold. They apply equally to all, including native-born Americans and immigrants, citizens and non-citizens.

The biblical requirement of two witnesses to establish guilt can be found in Deuteronomy 19:15. There is no “terrorism exception.” The Golden Rule – Matthew 7:12 – demands the presumption of innocence. Torture – i.e. presuming guilt and forcing a confession – does not measure up to these Scriptural standards.

Then people object: “But, they are war criminals.” No they are not! There has been no congressional declaration of war, as the Constitution requires. Moreover, terrorists are not “waging war” against us. They can’t, as they have no armies, navies or air forces. They don’t even have uniforms! They don’t even control the government of Yemen, so the idea that they could take over America is beyond absurd. Indeed, it has been several centuries since a Muslim country conquered a non-Muslim country.

(9/11 was an attack on persons and property, but not on our liberty. According to the official story, it was a suicide attack and the 19 hijackers are dead. You cannot take over a country, force everyone to speak Arabic, impose Shari’a law and do all these horrible things when you are – I will say this one more time – DEAD!)

So what is the practical application of this? There is a great quote from St. Thomas More in Robert Bolt’s play A Man for All Seasons:

“What would you do? Cut a great road through the law to get after the Devil? … And when the last law was down, and the Devil turned round on you – where would you hide, Roper, the laws all being flat? This country is planted thick with laws from coast to coast, Man’s laws, not God’s, and if you cut them down — and you’re just the man to do it — do you really think you could stand upright in the winds that would blow then? Yes, I give the Devil benefit of law, for my own safety’s sake!”

What goes around comes around. It is easy to disregard the Bill of Rights when your party is in power and their intentions sound noble and high-minded. However, just know that there are other people out there who think differently than you and who have other philosophies and priorities. And if you are willing to give your party a free pass, don’t expect the other party to behave any differently.

Millions of right-wingers were oh so nonchalant about the Patriot Act and its violations of the Fourth Amendment. “If you have nothing to hide, you have nothing to fear”, they said. “They can probe through my finances if it helps stop terrorism.” Well, now the other party is in office and these same people are now oh so indignant over Obamacare and its violations of financial privacy. You can’t have it both ways.

Many people who would smugly and self-righteously deny others the right – guaranteed by Ninth Amendment – to smoke marijuana are the same people who assert their right – guaranteed by the same Ninth Amendment – to homeschool their children. When you disregard the rights of others – for whatever reason, even an apparently good and noble reason – don’t expect your rights to be safe.

When the plan was to try Khalid Sheikh Mohammed in New York City – pursuant to the Sixth Amendment – numerous objections were raised, none of which had anything to do with the rights of the accused. One of the common ones was that “it would be a slap in the face to the 9/11 victims’ families.” (1) 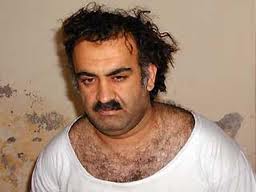 John Belushi at 3 am?

First, don’t be so arrogant as to think that all the 9/11 victims’ families are of one mind about things.

Second, when you violate the Constitution, you set a precedent. It would be the ultimate slap in the face for a relative of a 9/11 victim to one day be hauled off and tried in New Mexico for something they were accused of doing in Hackensack and arbitrarily denied due process protections spelled out in the Bill of Rights.

As if the Bush agenda wasn’t bad enough, Obomber has just issued an executive order claiming the power to incarcerate Guantanamo detainees for the rest of their lives even after acquittal.

(Expect to hear nothing from any Bush groupies about this outrage. Contrary to their fulminations, Obomber is not the polar opposite of Bush. Just as Bush was Clinton on steroids, Obomber is Bush on steroids.)

And if they can do this to scary looking brown guys with funny names and diapers on their heads, they can do it to you. After all, the entire post-9/11 agenda has been about reversing the presumption of innocence and making us all terror suspects.

White-gloved Michael Jackson was creepy enough. Blue-gloved Herbert the Pervert, on the other hand, destroys children’s innocence on the taxvictims’ dime in the name of “keeping us safe.”

This isn’t just about “protecting terrorists.” It is about protecting me.

And, reader, it is about protecting you.

(1) The Santa Rosa (CA) Press-Democrat on April 7, 2011 listed numerous examples of terror suspects being tried in the very places where they were accused of committing crimes. And no the earth did not spin off its axis and crash into the sun. Nor has Sports Illustrated started doing an annual burqa issue.

9 Responses to Yes, the Bill of Rights Applies to Terror Suspects