TSA: I Just Don’t Think Most People Get It

Originally posted at the Fountain of the Truth.

“Find out just what people will submit to, and you have found out the exact amount of injustice and wrong which will be imposed upon them;
and these will continue until they are resisted with either words or blows, or with both.
The limits of tyrants are prescribed by the endurance of those whom they oppress.”
– Frederick Douglass

On the afternoon of September 11, 2001, when we were all scurrying about like so many headless chickens, an old friend in Arizona sent an absolutely prophetic email. The subject line read: “They want you to panic…”

I quote the email in part:

“I know this is going to sound horrifically insensitive, but the fact that what amounted to — militarily speaking — a strategic pinprick can bring a nation’s people to a state of disarray we’re seeing unfold (even as I type this initial response) gravely concerns me. As terrible as this may sound, ultimately, it is the financial blow — both real and perceived — that will concern you and yours. I have even greater concerns…

“Yes, pray for the dead, the dying, the injured and their loved ones, but NEVER lose sight of the fact that many more people gave their lives over the past 226 years to make sure you live and breathe in Freedom — relative Freedom though it may be these days. Do NOT go off the deep end and cry for ‘more security’ at the cost of your basic Liberty. Believe me — there are powerful men who will willingly accommodate you at ANY cost.”

To begin with, 9/11 was not an attack on our freedom. It could not have been. The 19 hijackers are DEAD! And you cannot take over a country, impose Shari’a law, force everyone to speak Arabic and force women to wear burqas, when you are – I will say this one more time – DEAD!

The proper, moral, and constitutional response to 9/11 would have been a letter of Marque and Reprisal. This is a sort of warrant to go after the specific perpetrators of things like piracy and terrorism. There were no doubt people still alive who had a hand in planning and financing the attacks who needed to be brought to justice and punished severely.

Even so, the American people have gladly accepted endless war abroad as well as numerous previously unthinkable predations on their liberty here at home.

First came the Patriot Act in October 2001. This 300-page bill, which legislators were given 15 minutes to read, authorized warrantless searches, spying and wiretaps as a means of fighting terrorism. Fourth Amendment concerns were recklessly disregarded. Both the sellers and the buyers of the Patriot Act sang the same song: “If you have nothing to hide you have nothing to fear.”

After all, it was to go after those people over there. You know, those scary looking guys with funny names, diapers on their heads and bad attitudes. Those guys, not us.

I just don’t think most people got it.

Then airport security was nationalized with the implementation of the TSA. For a time there, you could not carry nail clippers on board a plane. And the fondling of naughty bits is nothing new.

Then some dweeb couldn’t even blow up his own shoe on a flight from Paris to Miami. So then we had to take off our shoes before going through airport security.

Then a few goobers in Britain supposedly tried to put explosives in water and shampoo bottles and blow up planes over the Atlantic. (They were all acquitted by the way.) Then we couldn’t carry water bottles through security. Nor could anyone take any liquid container over three ounces through security.

(The silence from most Christians on this issue is particularly appalling. What should I expect, though? So many of them have no problem with evil “if it produces a good result.” Never mind that this runs contrary to Romans 3:5-8.)

In any other context this would constitute child pornography, child molestation and sexual assault. (2) Someone somewhere has coined the term “gate rape”. Lew Rockwell has said that the United States just may be the very first country in the world whose government has claimed the right to feel up its subjects.

And if your response to this is “then just don’t fly”, YOU DON’T GET IT!

To begin with, if a terrorist really wanted to kill a lot of people and disrupt aviation, he wouldn’t need to go to the trouble of smuggling a bomb on board a plane. All he would have to do is walk into a terminal – e.g. O’Hare or Atlanta – on a Monday morning and let it rip right there.

Second, TSA has already announced plans to station its crotch-fondling flunkies in railroad and subway stations. They have just started doing random bag checks on the DC Metro subway system. They have already set up checkpoints at bus stations. And in late September, just west of Atlanta on I-20, TSA set up a roadblock to inspect trucks in the name of “counter-terrorism.” Remember: it is called the TRANSPORTATION Security Administration.

Third, the possibility exists that scary looking guys with funny names, diapers on their heads and bad attitudes could attack shopping malls, office buildings, stadiums, etc. Are you willing to submit to nudie cams and crotch-fondling there too?

And how about schools? I mean, you never know where a terrorist could strike next. Will you tolerate nudie cams and crotch-fondling there too? Again, what will you NOT accept? (2)

Will you put up with national security roadblocks too? Will you be okay when a routine trip to the grocery store turns into an all-day event replete with TSA blueshirts rummaging through every item in your car and performing cavity checks on you and your kids? If you have nothing to hide you have nothing to worry about, right? 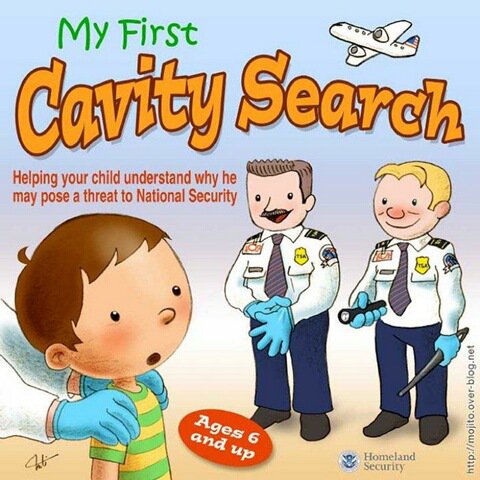 And if you so much as roll your eyes at the blueshirts about how ridiculous it all is, will you be okay with being hauled off and detained indefinitely without formal charges or the ability to obtain legal counsel? You did say, didn’t you, that you were willing to give up your freedom in the name of security?

People ridicule me for fussing about “my rights” in this age of terrorism.  I just don’t think most people get it. It is exactly during times of crisis – real or imagined – that governments look to take away rights. Moreover, this is also when people panic and give away their rights.

And if you will give up some of your rights to have more security, why not give up all your rights in order to have total security?

Thomas Jefferson once remarked that, “I would rather be exposed to the inconveniences attending too much liberty than to those attending too small a degree of it.” The likelihood that you or I will ever be the victim of terrorism is microscopic and in no way worth the price of the securitopia for which so many millions of Americans pine. (3)

Be careful what you ask for. North Korea has the world’s most comprehensive national security apparatus.

And, to be sure, they have no terrorism problem.

They also have no immigration problem.

What will it take before most people get it?

(1) No 9/11 truth posts please. I respect the truth movement and I have numerous doubts about the official story, but that is not what this is about.

(2) Great article: “The TSA: America’s Real Child Pornography/Molestation Machine”.
I have linked to this twice for a reason: TSA has YOUR CHILDREN in its crosshairs.

(3) I am also not at all fearful of “global jihad” as it has been several centuries since a Muslim country conquered a non-Muslim country. Moreover, terrorism is not a philosophy of government, but rather a tactic. Terrorists do not even control the government of Yemen. Hence, I am not afraid of them taking over America. And, as Pat Buchanan points out, other countries have solved their terrorism problems.

15 Responses to TSA: I Just Don’t Think Most People Get It